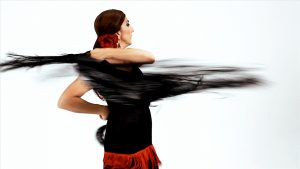 Danica Sena Gakovich, Internationally-acclaimed Master flamenco and Spanish dance teacher/choreographer/ performer has created, performed and produced over 200 original works for television, independent film and stage in Spain (where she resided from 1991-2000), Japan, Czech Republic, Mexico and the U.S. In 1996 she founded the now annual “Ago Arena” dance festival in Ugata, Japan that gives resident artists from Spain an opportunity to showcase their choreographies and in which her contemporary dance choreography “Soltura” received critical acclaim. In 2009 she was 1st-round award recipient in Counterpulse’s “Performing Diaspora” program. In 2012 she was honored with a month-long invitation to teach/choreograph in Madrid, Valencia and Castellón, Spain. In 2012 her film “Continuum” was featured in SF’s Tiny Dance Film Festival. She is the winner of the 2014 SF Bay Area Dancers’ Choice Award and in April of this same year Madonna (Ciccone) personally selected her film “Light Interrupted” for her Art-for-Freedom project. Ms. Sena is the founder and artistic director of Andanza Spanish Arts and resident choreographer/stage director for Her Rebel Highness.