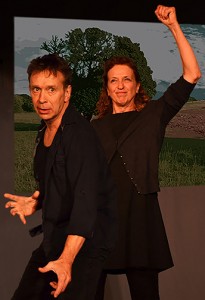 *Special Free Performance by the Guest Artists: ‘The Me Show’
Friday February 19 at 8:00 pm in the Anderson Auditorium of Edgewood College, Madison
(details below)

What is the conversation we want to have about the world and what theatrical form might be best employed to get that conversation started? We use forms of theatre is most appropriate for the material we’re exploring. We are extremely interested in where text and physical life overlap – genuinely believing that language is rooted in the physical state – and not simply a cerebral construct.

We’ll spend the days exploring what it is that interests, excites and obsesses us about the world we live in. We’ll also look at extant big stories / mythologies that in some way might descant on the themes and subject areas that come up – finding links between the personal and the universal.

Alongside the thematic explorations we’ll also be teaching specific physical and vocal exercises that we use as training tools to help extend physical vocabulary and which encourage us to think with the whole body – even when dealing simply with text.

Multi Story, a physical theatre company from the United Kingdom, established in 2000, is under the direction of Artistic Directors Bill Buffery and Gill Nathanson. multi story tours small-scale theatre productions for both adult and young audiences and provides an extensive workshop program. The company is particularly interested in the enduring power of story – and with finding simple and dynamic ways of firing the imaginations of audiences both young and old. They employ aspects of physical theatre with a variety of approaches to characterization and integrate new technologies as part of their story-telling palette. multi story currently offers a repertoire of eight plays for younger audiences and their families and eight plays for adult and student audiences. The plays for younger audiences are their own re-workings of traditional tales or myths. Their work for adult audiences reflects what’s intriguing them about the world!

Bill Buffery‘s formative years were spent with the National Youth Theatre of Great Britain, firstly as an actor, later spending four years as a director and staff member. He started his professional acting career with the Royal Shakespeare Company in 1978 and performed with companies around the UK, forming a particularly close association with Nottingham Playhouse as an actor and director. He returned to the RSC in 1987 as an Assistant Director and was also given two productions of his own to direct. In 1989 he moved to Devon where he was Artistic Director of Orchard Theatre Company for eleven years. During that period he directed over 40 productions – a mixture of new-writing, devised work and classical plays. A particular highlight was the association forged with Theatre de la Manicle from Le Havre with whom he wrote a couple of plays in both English and French.

Gill Nathanson is a graduate of Bretton Hall. She moved to Devon shortly after graduating to take up the post of Head of Drama at Pilton Community College. After a couple of years she moved out of the classroom and went to Wales to work with Theatr Powys. She then joined the highly regarded Belgrade, Coventry Theatre-in-Education team, returning to the South West a year later to work with Rent-a-Role in Plymouth. She joined Orchard Theatre Company in 1989 for whom – as a core company member – she played a wide variety of leading roles as well as delivering a comprehensive education and community program and superintending the running of three Youth Theaters. Before setting-up multi story she was beginning to develop a promising TV career – but the lure of live-theatre and the chance to develop her own original work proved too strong!

*Free Performance by the Guest Artists: ‘The Me Show’
Created and performed by Multi Story Artistic Directors Bill Buffery and Gill Nathanson. Friday February 19 at 8:00 pm in the Anderson Auditorium of Edgewood College, Madison, WI (Located in Predolin Hall)

This 5-star rated, award-winning production is a moving mix of fairy-tale and political commentary. ‘The Me Show’ weaves together two stories: a couple from a time past attempt to dig themselves a brighter future whilst a couple from time present face the repercussions of whistle-blowing. Making the world a better place comes face to face with the challenges of working together. Rooted in actual events, The Me Show is a fable, though an accompanying twitter-feed brings in our contemporary world. Presented by Kanopy Dance, Edgewood College and UW Milwaukee.