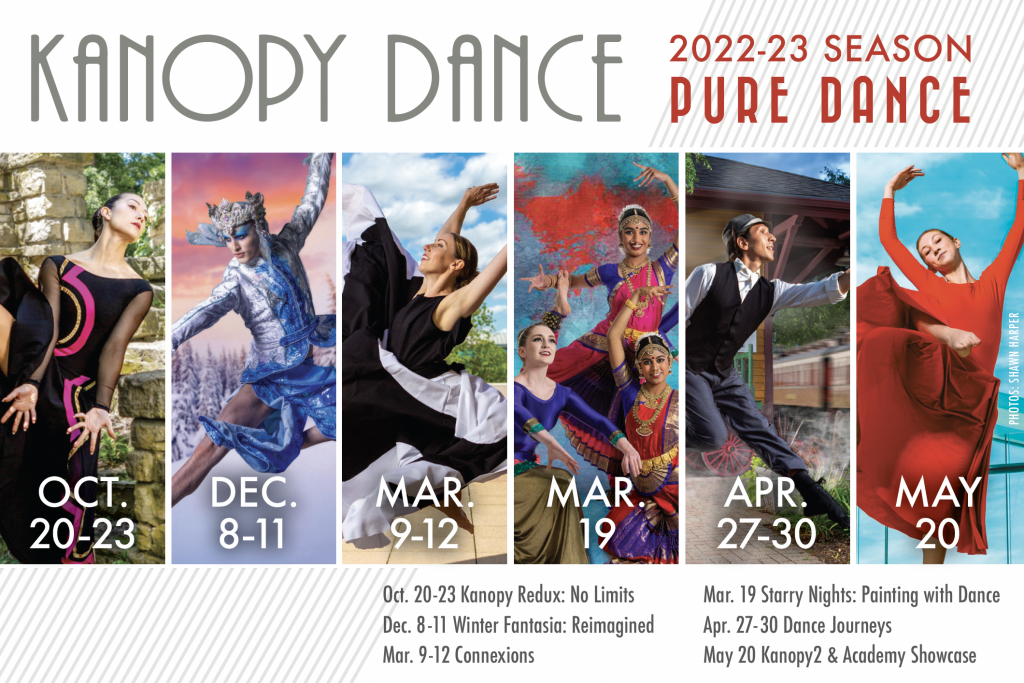 Watch Exquisite Art in Motion and “Views of the Fleeting World”… A Reimagined Multi-Cultural Winter Solstice Celebration… Premiere New Voices in Contemporary Dance … A Fusion Performance of American Modern and Classical Indian Dance … the Powerful Choreographic Tradition of Jose  Limón… and the Next Generation of Dance.

Rioult’s “Views”, a series of  7 dreams/meditations  performed in ensembles and as three duet groups, is a rare artistic treat that intertwines the parallels in Bach’s music and Asian culture Projected watercolor paintings– evoking Japanese woodblock prints, provide the backdrop for Views and recorded nature sounds are played during the transition between its sections. Rioult’s original costumes for Views, designed and fabricated by the renowned Karen Young  and inspired by the hearth tones in nature as well as by the pleated pants/skirts worn by the Samurais in ancient Japan– will be utilized in Kanopy’s production.

Kanopy Dance is the only professional company, (other than Rioult Dance NY), to perform Views, regarded as an extremely demanding contemporary dance, both technically and emotionally. Rioult was a principal dancer for the Martha Graham Dance Company , interpreting many of the most prestigious roles in the Graham repertory, including the “Christ” figure in Graham’s El Penitente, dancing with guest artist Mikhail Baryshnikov. In 1994, Rioult also founded the critically acclaimed Rioult Dance NY, which performed internationally.

The Winter Solstice, a time of transition when the dwindling light and the sun  are finally  poised return,  has been celebrated thousands of years and marks a season of festivities and storytelling on every continent and in many cultures. For several seasons, Kanopy’s Winter Fantasia has presented two cherished  winter stories rooted in Scandinavian folklore and brought to life through dance: “Once Upon a Winter’s Eve” and “The Norse Tree of Life” and they will continue to be a treasured part of the concert’s  program.

Starting this season, Kanopy presents Winter Fantasia Reimagined—designed  to enrich the spirit of  the holiday celebration by showcasing important contributions of other cultures–  with the debut of a  world premiere, “Chalo  Ramiye “, commissioned by Kanopy from South Asian dancer and choreographer Udbhav Desai. “Chalo  Ramiye”  (or “let’s play in Gujarati”), is a “garba” folk dance, and it is performed in ritualistic reverence of the Hindu goddess “Durga”, a protector of all that is good and harmonious in the world. Performing the festive garba dance form is a major highlight of the nine-day Hindu festival, Sharad Navratri, that honors “Durga” and has been observed for centuries.

As part of  the reimagined  Winter Fantasia,  noted costume designer David Quinn has created a wardrobe of new costumes for Lisa Thurrell’s “Once Upon a Winter’s Eve” an imaginary journey into the lives of the mythological  creatures including fairies and elves. Quinn, who designed many of the fabrics himself, was inspired by images of folk wear and medieval clothing as well as by the designers Alexander McQueen, Rei Kawakubo, and Guo Pei in ornately weaving and detailing his creative collection of gender-fluid costumes for Kanopy’s dancers.

Connexions features  guest dancers/choreographers Lloyd Knight and Jamar Roberts, who are recognized as premiere  voices in shaping the future of American Modern Dance and important artists of color.

Lloyd Knight presents his  world-premiere   “Commune” —a new work commissioned by  Kanopy and choreographed to an electronic mix by the Signal Band—that deeply resonates  in our society today. How does each of us find a path to community and experience a sense of togetherness or unity? Knight, a principal dancer with Martha Graham Dance Company , is also a guest Principal artist for The Royal Ballet of Flanders.

Another highlight of the concert is “Born to Love”, a solo to be performed by  the mesmerizing Knight and choreographed by Jamar Roberts, that explores the heightened emotions of love, indelible remembrances, and inevitable loss. It is set to Dianne Warwick’s hit “(There’s) Always Something There to Remind Me”.  Roberts , whose choreographic voice has been described as an “uncommon force and originality” by Dance Magazine , is the Resident Choreographer of the internationally renowned  Alvin Ailey American Dance Theater in NYC.

Also on the Connexions program is  Lisa Thurrell’s,  “For  Persephone ate the Pomegranate”, a solo inspired by the Greek myth of  Persephone- the ancient Greek Goddess of Spring and Innocence who was spirited away by Hades to become Queen of the Underworld. The poignant work is set to music composed by the late Vicky Tzoumerka- Knoedler– a composer and founder of the Mesoghios Dance Troupe and honors her art and her memory. Finally, Robert Cleary presents his “Fear is the Enemy”, a  political dance about  the loss of trust and silencing the voice of protest.

The Overture stage becomes a canvas when Kalaanjali Dance Company and Kanopy Dance Company  premiere Starry Nights: Painting with Dance  a fusion production inspired by the art of Dutch Post-Impressionist painter Vincent Van Gogh. The companies will combine principal modern dance techniques and classical Bharatanatyam Indian dance in three original choreographies that evoke  the expression, rhythm, and passion of Van Gogh’s  iconic works. Sixteen dancers will move against projections of Van Gogh’s masterworks and will artfully ‘paint’ the curved silhouettes of Van Gogh’s “Irises”, the entrancing stars and mysterious night sky in “Starry Nights”, and the rich colors and joy of Van Gogh’s “Sunflowers”— with a sensuous palette of dance forms.

The Kalaanjali Dance Company, based in Madison and San Francisco, will also present three traditional Bharatanatyam dances.  Kalaanjali Dance was founded by Kanopy’s guest artist, Meenakshi Ganesan, to promote and showcase Bharatanatyam, the oldest classical dance tradition in India that dates back nearly 3000 years. Bharatanatyam encompasses music, rhythm and expression and strictly adheres to the Natyashastra, (a Sanskrit treatise on performing arts).

Colin Conner, an internationally renowned dancer, award-winning choreographer,  and former artistic director of the Limón Dance Company, that is regarded as one of the world’s greatest–  guest directs two of his celebrated works :“Recent Arrivals” and “Weather in the Room”, in Kanopy’s Dance Journeys. Connor describes his work as: “rooted in the mystery of how we live in our physical beings. It is an ongoing investigation of perception, both of dancers and audience, and based on how, in the end, all human experience is felt through the senses.” Critic Jennifer Dunham, writing for the New York Times, praised the clarity of intention in every movement of Connor’s riveting choreography as “a relief …to see movement treated as a sufficiently expressive medium.”

“Recent Arrivals”  is a beautiful and poignant reminder of the American immigrant story that links us all. It has been set on both ballet companies and modern ensembles. The work is for eight dancers and performed to a sound score and the first movement of Schubert’s “Unfinished Symphony”.

“The work is an homage to those who have had the courage to leave behind their homeland and everything they know to face an unknown future. If we each look back at our ancestors, we will find someone who has made such sacrifices with hope to bring a better life for generations to come.”  Colin Connor.

In his cross-generational ,“The Weather in the Room”, Connor choreographs humanity and in his words: “unveils the strength and fragility of a long-term relationship” and the shifting emotional landscape that surrounds an older couple, to be danced by Kanopy’s Co-artistic Directors Robert E. Cleary and Lisa Thurrell. Six younger  Kanopy  Company dancers will illuminate and magnify the charged “weather” of  the couple’s evolving bond. Expect a stunning and synergistic performance with both generations of dancers  drawing  dynamic strength and artistry from each other.

THE NEXT GENERATION OF DANCE

The significance of the Next Generation of Dance cannot be overstated. Kanopy Academy and its 100+ dedicated students are integral to Kanopy’s cultural mission, and  we are so very honored to shine a special light on their hard work, and their technical and creative progress. Watch the next generation of dancers and choreographers in Kanopy’s pre-professional training program, Kanopy 2, and the Kanopy Academy ignite the stage with new ideas, new expressions and even original choreography and costuming developed and built by the dancers themselves.

The Next Generation of Dance is also a special opportunity for members of our pre-professional company, Kanopy 2 (along with some Kanopy Company members and Academy students), to perform iconic works  by Kanopy’s co-artistic directors, Robert E. Cleary  and Lisa Thurrell, who have earned national acclaim for their dancing and their choreography.

Kanopy 2, our second Company, offers a pre-professional training program open to exceptional students of dance by audition. Serious dancers are introduced to an intense vocabulary of classic and modern forms and study with national luminaries shaping the future of modern contemporary dance.

Numerous Kanopy 2 alumni have forged professional dance careers or earned success in other creative careers of their choosing. 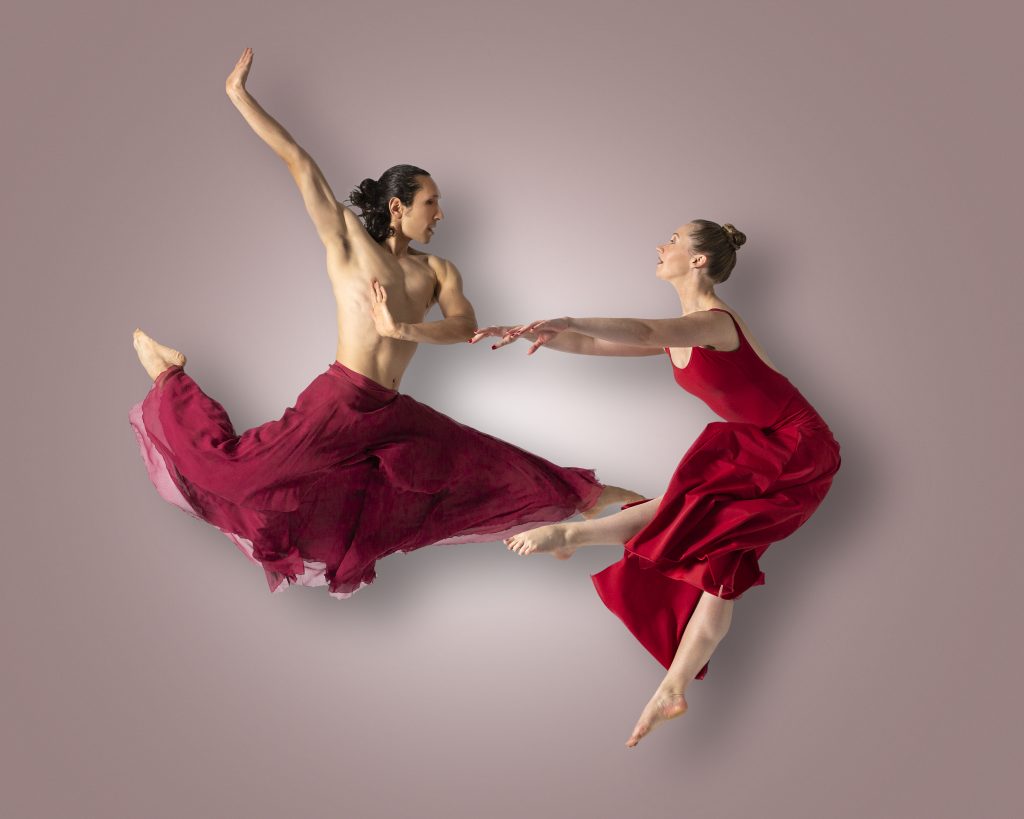