JOIN us for a special showing and preview of Sandra Kaufmann’s “A People’s Cry” to be performed in Kanopy Dance Company’s “Dark Tales” concert in its Season 2017-18 at the Overture Center for the Arts. Learn about the importance of Martha Graham in American Modern Dance, her artistry and technique. See the Kanopy Dance Company Dancers, Kanopy2 and workshop students presenting excerpts from Graham works and Graham dance technique, and a work in progress ‘Etude’ by Miki Orihara.

Miki Orihara is best known for her work as a principal dancer in the Martha Graham Dance Company, which she joined in 1987. In addition to performing the Graham repertory, she has worked closely with the renowned Japanese-American dancer, choreographer and director, Yuriko, preserving her unique approach to Graham Technique.

Orihara has performed in the Broadway production of The King and I, with the Elisa Monte, Dance Troupe, PierGroupDance, Lotuslotus, Twyla Tharp, Martha Clarke, Anne Bogart (SITI Company),Theatre of Yugen(SF,CA) and Robert Wilson. She has presented her own choreography in New York and in Tokyo as a guest artist for Japan’s New National Theater.

Her teaching credentials include numerous workshops in Japan, Art International in Moscow, Peridance, the Ailey School, New York University, Florida State University, Henny Jurriëns Stichting( Netherlands), Les Etés de la Danse in Paris and New National Theater Ballet School. She is on a faculty at the Graham School, The Hartt School ( University of Hartford) and Barnard College (Columbia University). As a Regissuer on Martha Graham’s work, she has been setting works worldwide, including Diana Vashineva’s “Dialogue” and for Wendy Whelan of New York City Ballet.

mishmash＊Miki Orihara launched in 2013, as a Casting Producer / Dance Director, created two music videos which released in June, 2014. Orihara served as a Movement designer for Jen Silverman’s “Crane Story” directed by Katherine Kovner. Orihara is in process of making Martha Graham technique DVD, collaboration with Dance Spotlight and Martha Graham Center. Orihara was featured for the Inaugural performance of “Peace is…” at the United Nations as a part of the Permanent Mission of Japan in April, 2017.  She produced a benefit concert ” Dancing for JAPAN 2014″ and “Dancing for JAPAN 2017”. She produced the first solo concert “Resonance” at the La MaMa theater in New York in May, 2014, danced works of Graham, Jose Limon, Martha Clarke, Adam Barruch and Orihara. The second “Resonance II” premiered NY in April 2017, works by Graham, Merce Cunningham, Lar Lubovitch, Tanroh Ishida/ Orihara and Charlotte Griffin.

In 2010 she was awarded the prestigious Bessie Award for Sustained Achievement in Dance. 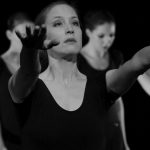 Sandra Kaufmann, Dancer and Choreographer is the founding director of the dance program at Loyola University. Sandra danced in NYC for the Martha Graham Dance Company and served as Artistic Director of the Martha Graham Ensemble. She has also performed for many years with Pearl Lang and Richard Move. As a choreographer, Ms. Kaufmann has created works for concert dance, musical theatre productions, opera, video and site specific works. She has been honored with awards from Dance Magazine Foundation,Tidmarsh Arts Foundation, The American College Dance Festival, Bossak/Heilbrun Foundation and Sloan Science & Dance Technology Commission. Sandra has created many works based on visual artworks as well as science. With Michael Bassett and Brian Green, Sandra was the keynote speaker for Art/Science International’s Annual Conference at the Museum of Natural History in New York in 2001. Sandra’s latest work, Blue Window, is an adaption for the stage of Chagall’s stained glass masterpiece. Ms. Kaufmann graduated summa cum laude from the College of Education and the College of Visual and Performing Arts at Northern Illinois University, where she gave the commencement address for both colleges. Sandra received talented student scholarships from Northern Illinois University and the Martha Graham School of Contemporary Dance. She is a member of Phi Kappa Phi Honor Society and serves on the board of the Doris Humphrey Society. Ms. Kaufmann currently works as an independent choreographer and a regisseur who restages the works of Martha Graham and Doris Humphrey; and, a dancer with MOMENTA Dance Company. Sandra has served on the faculty of Barnard College, New York University and The Martha Graham School of Contemporary Dance in New York. In Chicago she has taught at The Chicago Academy for the Arts, University of Chicago, The Academy of Movement and Music and Loyola University Chicago.