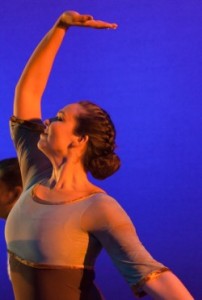 Space is Limited, payment and registration must be received to insure space in class. Everyone must register online. Payment may be paypal or check mailed to Kanopy Dance 341 State St Madison, WI 53703. Ages 11-adult, all levels. Fee: $25.

According to legend, the first Hula occurred when the Goddess Pele demanded to be entertained by her sisters. Her favorite sister, Hi`iaka was the only one to comply, and did so to the amazement of all.

There are two prominent types of Hula that are taught in Halaus; Hula Kahiko and Hula `Auana. Kahiko is the ancient style of dance that is closely related to hawaiian oil or chants. With the introduction of stringed instruments to the Hawaiian islands, came a change in the dance styles as well. The sounds of a slack key guitar, or an ukulele are more commonly heard accompanying hula `Auana. In this master class Tiana will be going over the basic footwork of Hula. Attendees will learn many of the steps commonly used in Hula `Auana — the modern form of Hula. Toward the end of the lesson Tiana will teach a Hula `Auana phrase to a contemporary Hawaiian song.

Tiana Ching Maslanka, born in Honolulu, Hawai`i, began performing at the age of four. She began studying Hula at the age of 8 with Hula Halau O Leiolani, under Kumu Hula Leiolani Pratt. At Mid-Pacific Institute, she took hula classes with Michael Lanakila Casupang, while earning her certification in the Mid-Pacific School of the Arts Theatre program, and the International Baccalaureate Diploma program. She contributed to and danced in the annual luaus of the Hui O Hawaii club at the University of Puget Sound in Tacoma, WA. While earning her MFA in Dance at the Univeristy of Hawaii she also studied Hula under Kumu Hula Victoria Holt Takamine. She has performed and taught Hula for parties and entertainment in the New Jersey/New York area with Aardvark Entertainment, Elephant Studios, and Horizon Entertainment, as well as locally for family fun nights and Vacation Bible Schools in the Middleton area. Tiana is certified as an Associate Instructor of Stage Combat through Dueling Arts International. In 2003, Tiana placed in the Pacific Northwest Lindy Hop Championships, in Seattle, WA. Tiana received her B.S. in Mathematics from the University of Puget Sound, and her MFA in Dance Performance and Choreography from the University of Hawaii at Manoa, where she studied modern dance under Gregg Lizenbery, Peggy Gaither-Adams, and Betsy Fischer. She is certified in Elementary Labanotation, a writing system for dance, and has taught classes and choreographed for theatrical shows and dance concerts in communities throughout the country and is currently on faculty at Kanopy. Tiana debuted with Kanopy in the 2008-2009 season and rejoined Kanopy in 2011.