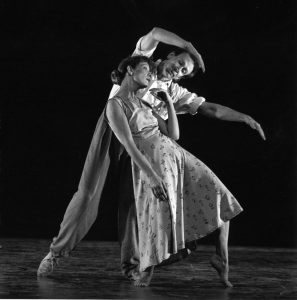 For Intermediate/Advanced dancers, actors, movement artists, performance artists ages 12-adult. Learn from Master Teachers Steve Wasson and Corinne Soum, the Artistic Directors of Theatre L’Ange Fou, and the last Assistants to Corporeal Mime founder Etienne Decroux. Students will have an in depth study of Technique, Repertory, and Creation. There will be an informal showing at the end of the week with Mr Wasson, Ms Soum, Kanopy Dance Company, Kanopy Company 2, and workshop students.

This workshop is geared for dancers and movement artists who desire exploration of the movement arts. Contemporaries, both Graham and Decroux pioneered a more direct and psychologically powerful means of physical artistic expression. “Corporeal Mime is about taking action and about giving structure to ideas and emotions. It is learning how the human spirit might find the ultimate fulfillment in physical form. It is giving the performer the ability to do what he wants and not just what he can. Corporeal Mime is a technique, which allows the practitioner to learn, through a unique vocabulary how to express theatrically human behavior from its most practical aspects to its more abstract and spiritual ones. It is the art of the thinking body. Corporeal Mime created by Etienne Decroux, is an innovative method and a precise technique focusing on the body and physical action in theatre”. – Steve Wasson, Theatre L’Ange Fou, White Church Project.

Steven Wasson, born in the US, is Director of Theatre de l’Ange Fou, International School of Corporeal Mime, London, and White Church Theatre Project, Spring Green,WI. He studied literature and drama at University of Northern Colorado with Lloyd Norton, mime with Reid Gilbert at Valley Studio,WI. In Paris, he was student of Etienne Decroux later becoming his assistant. Decroux created Le Prophete and Le Duo dans le Parc St. Cloud for him, and set classic repertoire on him. He has created, performed, and directed all plays for Theatre de l’Ange Fou. He worked in film, TV, radio in US and France with award winning documentary director Dominique Benechetti and Oscar winning filmaker Serge Bourguignon. In 1989, his play Le Petit Dictateur was awarded Label of the Revolution in France. In 1996, Steven directed mime scenes for Simon Callow’s Royal Shakespeare Company’s Les Enfants du Paradis. He acted, written and directed for Avatar Meher Baba Theatre, India, and taught corporeal mime physical theatre internationally for 30 years. www.angefou.co.uk

The Theatre de l’Ange Fou and the International School of Corporeal Mime were created, in Paris in 1984 and London in 1995, by Steven Wasson and Corinne Soum, the last assistants of “the father of Modern Mime” Etienne Decroux. The school is devoted to the development of the technique, growing Repertoire and dramaturgy of Corporeal Mime, and offers professional training programmes. The Theatre de l’Ange Fou, has toured Europe, Russia, North and South America and the Middle East. The company has created over 20 plays ranging from duets to ensemble works: The Little Dictator – parts I & II, Beyond the Garden, Crusade, Entangled Lives, The Government Inspector, The Orpheus Complex, Across the Seven Seas, and their latest, A Promethean Dream, Etienne Decroux – The Father of Modern Mime and Waiting for Ulysses … revealing different aspects of the spiritual and human quest and the complexity of relationships between individuals longing for love. In 1992, they re-introduced to the public the Repertoire of Etienne Decroux with their reconstruction, and performances by the Theatre de l’Ange Fou, of his major pieces (including La Meditation, Les Arbres, L’Usine…) in The Man Who Preferred to Stand, and more recently in Passage of Man on Earth, Resonance and A Promethean Dream. This was the beginning of the transmission process that is today the base of their teaching. Both company and school are now permanently in residence at the White Church Theatre Project in Spring Green, Wisconsin.

Etienne Decroux. In the 20th century, Etienne Decroux (1898-1991), student of Jaques Copeau, actor with Charles Dullin, Louis Jouvet, Gaston Baty, Antonin Artaud, Marcel Carne…) known as the “Father of Modern Mime and one of the great luminaries of the theatre world” (Sunday Times), gave Mime a true autonomy with a specific vocabulary, Repertoire and philosophy. He invented the most modern form of mime, “Dramatic Corporeal Mime”, an innovative method and precise technique focusing on the vital importance of the body and physical action in theatre. He created a Repertoire of physical theatre work which stand apart from any adaptations of written plays or literary texts. To many theatre historians, Etienne Decroux belongs to that family of Director/Pedagogues such as Gordon Craig and his theories of the super marionnette, the biomechanics of Meyerhold, Stanislavsky’s actor as the master of physical action, Chekov’s psychological gesture, Grotowski’s laboratory and the visions of Artaud. The difference is that Etienne Decroux is the only one to affirm that corporeal expression is not only the base of theatre, but also, more importantly, a new, independent, theatrical art form.

“The theatre will only be worthy of its name when the one who acts breaks free from the one who writes. First one must improvise without even knowing on what. Then, one must find a theme, then a second and then a third. In other words, one must act in order to think. By putting a logical order to ideas encountered through movement, a piece will emerge.” (E.D.) This Repertoire is alive and evolving today. It is being taught and performed by a new generation of performing artists inspired by Decroux’s adage, “making visible the invisible.”